The Effect Of Afterpay And Zip Pay On Your Credit Score

Have you ever thought to yourself, “I would love a Samsung 65 inch 4k HD TV” or “I need hair expansions now!” but you don’t have enough money to buy it now? What if you could take that 65 inch TV home without paying for it now? How would you feel if it was interest-free with no signup costs?

You now can, and it is very inviting. But these programs have a few credit traps that you need to look out for.

The buy-now-pay-later business model is paving the path for a new era in e-commerce. The two major giants in Afterpay and Zip Pay are offering a range of interest-free goods and services. You can purchase anything from clothes, beauty products, electronics and even discounted travel deals and pay later.  This country has recently witnessed an influx of Australian retail giants, such as Myer, Amazon, Kmart, Bunnings and Appliances Online all partnering with pay later providers such as ZipPay and Afterpay to offer their products and services to customers.

How the deferred payment program works

With the meteoric rise of modern-day lay by providers; there have been growing concerns that these services will lead to financial stress; particularly among the younger generation. A 2018 review conducted by ASIC, revealed that 60% of buy now pay later users are aged between 18-34 years old. Alarmingly 40% of consumers are students or working part-time. With quick and convenient access to goods and services; consumers are overspending and overcommitting. This has led to an increase in outstanding debt.

Oh no! I missed a payment. What now?

Life sometimes travels at a million miles an hour. Sometimes we let our finances get ahead. It is however important to keep track of upcoming repayments. Any transactions purchased through buy now pay later services are bound by a contract. Therefore, you have an obligation to pay for the goods/services purchased. 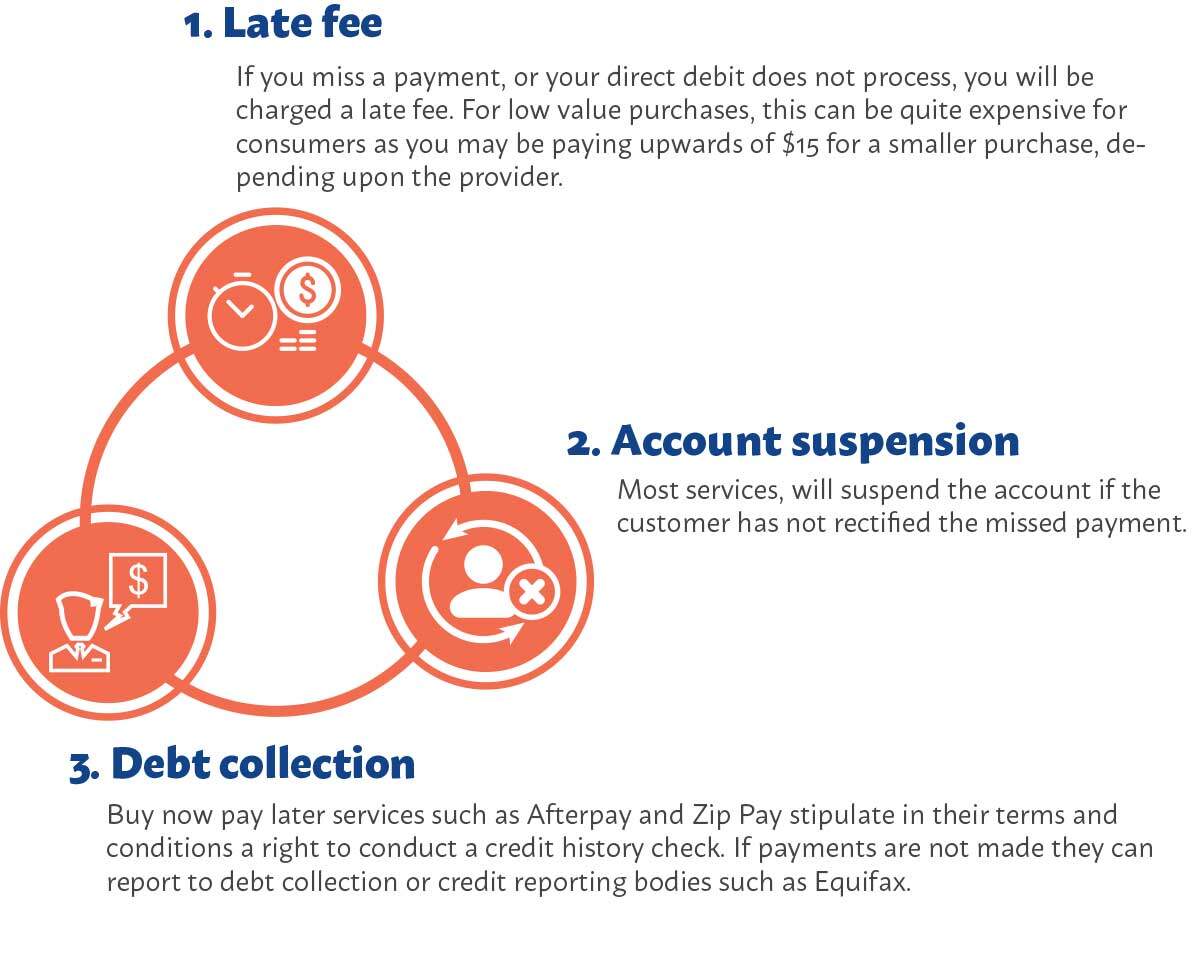 Can Zip Pay and After Pay type providers affect your credit score?

If buy now pay later services such as Afterpay reach out to external debt collectors; or credit reporting bodies, your credit score may be affected. If you have a blackmark or a default on your credit score, it may be difficult to secure a loan. Credit checks are a crucial factor in determine whether or not you qualify for finance. You do not want your financial habits at a young age affecting you in the long run, particularly if it is due to the purchase of a television or an overstretched Jumper. Even the smallest purchases may have an adverse effect on your credit file.

Whilst buy now pay later services offer fast, convenient and easily accessible goods and services, it is important to be weary of your spending capabilities. You need to make informed decisions based upon your financial state.

If however, you find yourself stuck with a default or black mark, there are credit repair services that can assist in possibly removing these defaults or judgements.